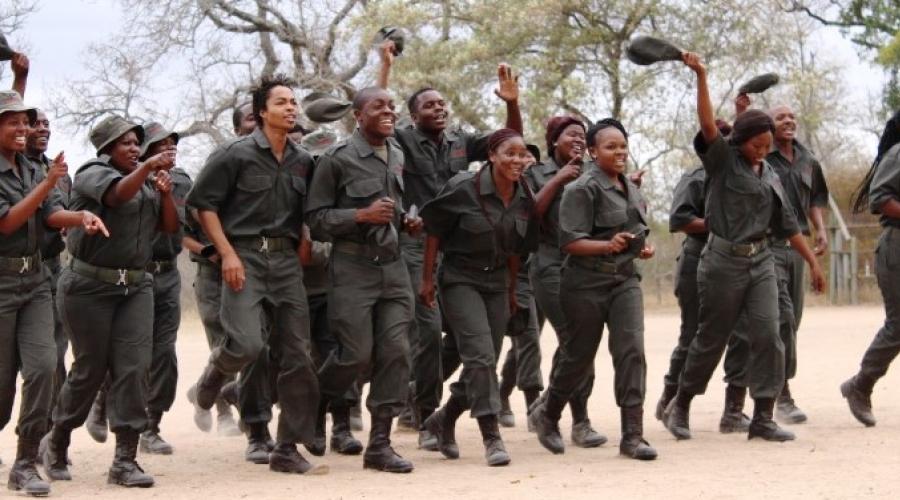 The Southern African Wildlife College recently bade farewell to the Conservation and Environmental Education bridging programme class of 2016. Their victory over this challenging six-month course was marked by songs of celebration that filled the air as the 23 learners left the parade ground after their final drill.

This year’s course attracted youth from five of South Africa's provinces - Limpopo, Gauteng, KwaZulu-Natal, Mpumalanga and Western Cape. In gaining entrance into a career in nature conservation and/or environmental education, the learners spent four months at the college, during which time they attended first-aid, snake handling, environmental education, environmental leadership and unarmed field ranger training. This prepared them for their two months experiential work placement in state-owned nature reserves. The learners were involved in activities ranging from general conservation guardianship, identification of fauna and flora, fence patrols, tracking and apprehending small game poachers, environmental education with schools, and engagement with communities neighbouring their reserves/workplaces.

The Community, Youth Development and Access business unit manager, Christopher Kafoteka, opened the programme with a word of welcome to the guests. Student representative and Klaserie Children’s Eco-Training schools coordinator, Queen Manyike, spoke about the group’s collective learning experience and on how the course has opened the door to their future careers or further training, while also upgrading their skills so they can better serve their communities and local schools. Xolani Mongwe, a previous learner on the programme who is currently in the employ of LEDET, then addressed the guests as one of the learner mentors in Manombe Reserve. He echoed the importance of this programme in terms of providing opportunities for the learners as future conservationists and went on to stress the importance of living a passionate life and giving back to the community.

Sboniso Phakathi, the project coordinator, thanked the funders for their commitment to providing South Africa’s youth access to training opportunities. The programme’s supporters include the Hans Hoheisen Charitable Trust (managed by Nedbank Private Wealth), which has funded the course since its inception in 2010, Swiss-based ‘Friends of African Wildlife’, the Timbavati Foundation and the Rand Merchant Bank Fund, which has provided a three-year commitment to the programme.

“Aimed at bridging the gap for school leavers from historically disadvantaged communities, who want to follow a career in conservation but do not have the necessary credits, tools or funding to do so, this programme has become an integral part of the college’s curriculum,” said Phakathi. “For the first time this year, the course will also be offered to learners from the Southern African Development Community region as an additional programme funded by United for Wildlife through the support of The Royal Foundation of The Duke and Duchess of Cambridge and Prince Harry,” he added.