Limpopo National Park in the GLTP celebrates its 16th Anniversary 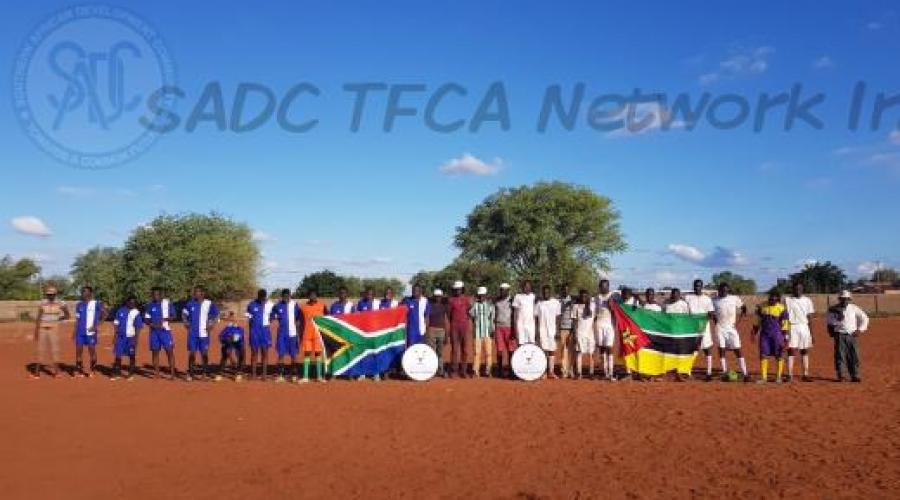 The Limpopo National Park (LNP) celebrated its 16th anniversary on 27 November 2017. Mozambique proclaimed the Park on 27 November 2001 which forms part of the core area of the Great Limpopo Transfrontier Park (GLTP).  The GLTP was established by the signing of the trilateral agreement which was followed by the signing of the Treaty by the three Heads of State (Mozambique, South Africa and Zimbabwe) on the 09th of December 2002.

Celebrations were preceded by a week-long community and youth engagement programme that included visits to the Park, educational presentations at local schools, and soccer play-offs between ten teams from villages in and around LNP. As part of the GLTP Youth and Sustainable Livelihoods Programmes, the South African Department of Environmental Affairs through the Directorate: Transfrontier Conservation Areas donated 10 Soccer Kits, 20 Soccer Balls and 10 Field Nets to LNP for distribution to the teams for the celebrations.  The GLTP Youth and Sustainable Livelihoods Programmes objectives aim to develop a collective vision and integrated approach to enhancing livelihood options in the project area and to target groups. The event and the tournament was organised by Mozambique’s conservation management agency, ANAC through LNP Park Management.

The official opening of the new Macavene Field Ranger base situated at the head office of LNP took place the next day also as part of the celebrations.  The ranger base construction was facilitated by Peace Parks Foundation, funded by the German Federal Ministry for Cooperation and Development (BMZ) through KfW, Agence Française de Développement (AFD), the Deutsche Gesellschaft für Internationale Zusammenarbeit (GIZ) and the World Bank.

The ceremony was attended by district administration officials, community leaders, representative from the South African Department of Environmental Affairs, and media. Celebrations included demonstrations by the local ranger force, theatre with conservation messaging and singing performances and ended with attendees sharing a meal at a picnic site overlooking the beautiful Massingir dam.

The new ranger base functions primarily as headquarters for protection operations in the southern region of the Park. Previously, rangers deployed from this area were accommodated in a tented camp very close to where the new base has now been built. The tented camp did not offer conducive living conditions, nor did it have sufficient space to accommodate all the rangers - with some of the staff having to travel back and forth between the Park and nearby towns such as Massingir every day. Not only did this situation place a strain on resources, but the absence of large numbers of key rangers from the Park furthermore hampered the effective execution of night-time operations. The new facilities are conveniently situated close to the park offices, and offers comfortable living quarters for all the field rangers, section rangers and patrol leaders based in the area. It has served to greatly boost ranger morale, and has enabled faster and more effective reaction force mobilisation. The secondary purpose of the base is to function as a training and function venue, and additional accommodation space has been constructed for this purpose.

GLTP_Article_Donation of Soccer Equipment and Opening of Ranger Facilities in LNP (Nov 2017).docx