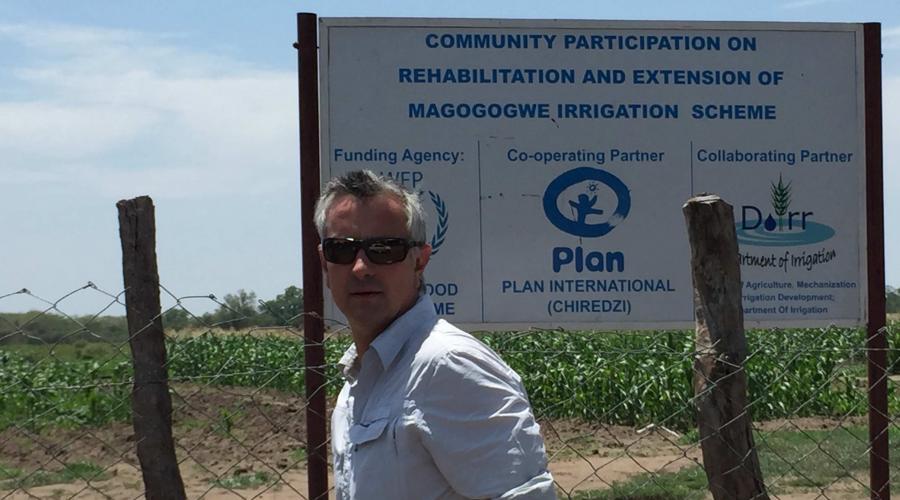 This quarter, the SADC TFCA Network has selected Piet Theron, International Coordinator for the Great Limpopo as TFCA Champion.  He has occupied the post on a part-time basis since January 2013. Mr. Theron is currently responsible for the coordination of various programmes and activities associated with the further implementation of the Great Limpopo Transfrontier Conservation Area, including bilateral and trilateral collaboration on conservation management, wildlife crime, cross-border tourism, community beneficiation and livelihoods diversification. This involves both the development of the core area of the Transfrontier Park, consistent of the Limpopo, Kruger and Gonarezhou National Park and the Sengwe-Tshipise Corridor (link between Kruger and Gonarezhou National Parks) as well as the second-phased vision of a TFCA with a broader conservation area around the core.

Mr. Theron has more than 20 years’ experience working on a wide range of natural resource management and social development projects in Southern Africa. His key skills and expertise are focused on planning, managing, and implementing large and complex multi-national, multi sectoral and multi stakeholder integrated conservation and development projects, which involves setting up effective partnerships between governments, the private sector and NGOs. Through his commitment in partnership building, Mr. Theron has been instrumental in further developing this well-known TFCA together with the partner countries of South Africa, Mozambique and Zimbabwe.

Colleagues that have worked with him for a long time describe him as a true servant, blessing and champion of communities living in and around the TFCA.  South African Focal Point for GLTFCA, Aruna Seepersadh, strongly feels he deserves the honour bestowed upon him. She said during an interview that she has known and worked with Mr. Theron for 15 years. “He has been on the forefront of supporting government in the beginning when TFCAs were being established and he left the limelight for a while and came back to TFCAs a few years later. His experience in this field, broad knowledge, personality, character and passion for the initiative allows him to be a TFCA champion.  He has a firm and good way to interact and bring people together, coordinate and produce the desired result.  And with the many programmes that are running in the GLTFCA, he doesn’t let the ball drop,” attested Ms. Seepersadh. His cooperating spirit was also emphasised by his colleague from Mozambique, Ms. Custodia Monteiro. “Mr. Theron contributed greatly towards the incorporation of a part of the Game Farms into the GLTFCA area through the MoU signed between Licoturismo and ANAC,” she said. Only recently the ground-breaking process has received new momentum when the Greater Libombos Conservancy (GLC) in Mozambique was formally established. This is the first privately owned area to be included as part of the GLTFCA.

Ms. Seepersadh also commended Mr. Theron for his work towards bringing South Africa and Mozambique together in addressing rhino poaching. Mr. Theron has been very instrumental and innovative in curbing the wildlife crime crisis that has swept the TFCA in recent years. “When wildlife crime began and started impacting on GLTFCA, Mr. Theron joined hands and also pulled together all role players including governments and agencies involved in the TFCA to strengthen the relationship between state parties and focussed everyone in seeking solutions to the problem. He gets a diverse group of individuals, from scientists to rangers, together in the same room to thrash out a difficult subject.  At the end of the day, what comes out is a well-planned, well-resourced number of projects that provides tangible solutions,” she said.

This was reaffirmed by Mr. Theron during an interview when he explained that the team effort has yielded great success in efforts towards alleviating wildlife crime. “The same collaborative efforts have really brought South Africa and Mozambique together to look at their legal and policy reform as well as joint operations against the poaching scourge that has swept the TFCA,” said Mr. Theron.  He said as a result a Memorandum of Understanding on Biodiversity Conservation and Management was signed between the two countries in 2014. “Since then officials from Limpopo and Kruger National Park have successfully collaborated on a number of strategic anti-poaching activities leading to a decline in rhino poaching on the border of South Africa and Mozambique,” he reassured. Mr. Theron offers his services to conduct workshops and compile project concepts and plans.  “In GLTFCA, Mr. Theron has ensured that a wildlife crime committee was established within the Joint Park Management Committee and a Joint Operational Plan was developed which directed human and financial resources into a number of interventions to be carried out jointly to alleviate wildlife crime in the GLTFCA,” Ms. Seeprsadh added.

When asked about the interface between conservation and socio-economic development, Mr. Theron said that his love for conservation is people orientated more than anything. “I have always been interested in rural development. When I worked in the Okavango Delta in 1996 for a year I got involved in the first community wildlife management initiative in Botswana. That combination of working in this beautiful place closely with rural communities sparked a real interest in the work I do,” he said.
“This is currently reflected in our work to develop the Sengwe-Tshipise Corridor in Zimbabwe.  Starting off as a wildlife corridor,  it is now mostly intended to provide a tourism link between Kruger and Gonarezhou National Parks through the Sengwe Communal Area.  A number of cross-border tourism products are currently being developed to operationalize the corridor, including an annual cross border trail and Shangane Festival as well as a proposed MTB event. The Sengwe community on the Zimbabwean side committed their land to the Transfrontierr Park and should derive tangible benefits from the GLTFCA initiative,”said Mr. Theron. The vision is to get more tourism opportunities through improved land and air linkages that will enable more movement and benefit from Mozambique and South Africa to Zimbabwe. “Communities are supportive of the initiative, we need to ensure that the benefits start flowing,” he said.

Ms. Custodia Monteiro also believes that his passion towards GLTFCA communities has earned him the TFCA Champion title. “Mr Theron’s patience in clarifying the steps and paths to be followed when addressing sensitive issues like the fight against poaching and alleviating the poverty of communities living in and around the GLTP in the broader TFCA area is outstanding,” she said. To rubberstamp this Ms. Seepersadh said Mr. Theron is completely committed when it comes to engaging with communities and youth. She said, “He also makes sure that he understands what other programmes and interventions have been done in order to complement each other.  During a brainstorming session in the park, we realised that there was a need to understand how the poaching problem was affecting the youth in the communities living adjacent to the park and what the TFCA could do to improve and empower the communities. After thrashing out ideas and researching the affected areas, Mr. Theron drafted a concept note to pull all the ideas and knowledge together. Once that was done, he had conversations with funding agency PPF and then Laureus Sports for Good Foundation. A wonderful relationship was born which then piloted a youth exchange programme where Mozambican youth came to Kruger and experienced some lifetime’s ‘firsts’. A first road trip, first time in another country, first shower, first flushing toilet, and so on,” she said.

Mr. Theron’s love for communities and their welfare according to Ms. Seepersadh surfaced once more through his approach to the GLTFCA Community Livelihoods Diversification Strategy. “He had seen a gap in socio-economic development in the immediate GLTFCA community groups.  He went looking for funding, drafted a concept and made sure that the Strategy was funded and developed. Now the Strategy is being implemented in the identified nodes. Mr. Theron ensured that we follow a methodology that was strong in consultation and came up with tangible areas of focus so it was not just a strategy but almost immediately implementable.  I see him being the person to once again pull the right people together in the implementation of all the priority projects such as the Makuleke area of Kruger National Park,” said an enthusiastic Ms. Seepersadh.

Mr. Theron feels that working with local communities is one of the most important aspects of his work.  “The rural communities that I work with trust me because I continuously demonstrate that I genuinely have their best interest at heart. GLTFCA has offered me the space to work with three unique components of the TFCA each home to very diverse communities and I thoroughly enjoy the service I provide to them,” he explains.

For the future Mr. Theron hopes that the TFCA can become self-sustainable from an institutional, governance and functional perspective. “In the end the TFCA has to have a pulse of its own and create an environment where communities realise they are better off with, rather than without, the TFCA,” he adds optimistically.