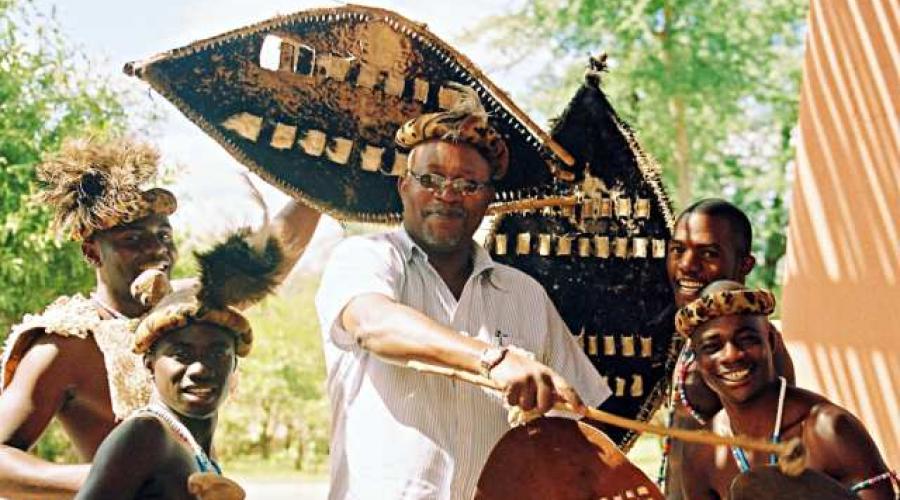 Meet Mr Sedia Modise - currently working as Country Programme Manager for the Peace Parks Foundation’s (PPF) Botswana Office in Gaborone.  Mr Modise was an integral part of the team that made the Kavango Zambezi Transfrontier Conservation Area (KAZA TFCA) what it is today. During an interview he elaborates on his demanding role as the first Regional Coordinator for KAZA, which he held from 2007 until the Secretariat was established and functional in 2011. Having worked very closely with Mr Modise during the initial stages of KAZA, former KAZA Technical Assistant Nidhi Ramsden said the TFCA community is bound to use laudatory words when describing him because he has throughout his career demonstrated an unshakeable belief in the TFCA concept. “He has a lot of faith in the SADC TFCA Programme’s potential; he envisions it will contribute immensely to the socio-economic development and ecological health in Southern Africa as well as globally.” For anyone to be TFCA champion, the prerequisite should be belief in and heart for the TFCA concept which Mr Modise definitely has, apart from his wisdom and institutional memory which comes with extensive experience. “During his time at KAZA he was always willing to go the extra mile and exerted such positive energy into the team” said Ramsden.

Mr. Modise first got involved in the KAZA TFCA when he teamed up with consultants engaged by PPF to undertake the Pre-Feasibility Study for the TFCA in 2002. He was later seconded by PPF to Botswana to become the first Regional Coordinator for KAZA when Botswana became the first Coordinating Country for KAZA. At the signing of the KAZA Memorandum of Understanding in December 2006, the KAZA Partner countries had decided that the role of Coordinating Country was to rotate in alphabetical order meaning Angola was supposed to coordinate KAZA activities first followed by the other countries. This role was taken over by Botswana after Angola indicated that they were not ready at that stage to take on this role. Botswana in turn requested PPF to second Mr Modise to become the Regional Coordinator for KAZA given his vast experience in both conservation and TFCAs matters. Following his release to Botswana, one of the primary responsibilities of Mr Modise was to articulate KAZA’s long term strategic elements including its vision and mission, and to obtain the buy in of the KAZA TFCA as a SADC approved environmental and rural development programme. Mr Modise said from day one he has believed and completely bought into the KAZA TFCA mission which is “to sustainably manage the KAZA ecosystem, its heritage and cultural resources based on best conservation and tourism models for the socio-economic wellbeing of the communities and other stakeholders in and around the eco-region through harmonisation of policies, strategies and practices.”

As the former Director, of the Department of Wildlife and National Parks (DWNP) in Botswana, Mr Modise had led the Botswana team in the development of the SADC Protocol on Wildlife Conservation and Law Enforcement of 1999 which urges the SADC Member States to embrace the TFCAs concept in managing natural resources that straddle their international boundaries. Mr Modise also led the Botswana team in the negotiations to establish the Kgalagadi Transfrontier Park (KTP)  – Africa’s first formal TFCA whose Treaty signing in 1999 paved the way for joint collaboration and cooperation in managing the shared natural resources along the international boundaries between the Republics of Botswana and the then newly liberated South Africa. He was also the first International Coordinator for the then proposed Limpopo/Shashe TFCA now commonly to referred to as Greater Mapungugwe TFCA, and with this vast experience and knowledge it was fitting that Mr Modise was given the task to lead the KAZA TFCA development programme as he was well respected in the conservation circles within the SADC region.

The formative days of the KAZA TFCA required someone of the caliber of Mr Modise to lay a solid foundation for the development of the KAZA TFCA.  Fortunately there was strong collective political will from the KAZA partner countries which enabled Mr Modise to successfully harness this political commitment which enabled him to put structures and strategy documents in place to propel the TFCA development forward. According to Ramsden, one of the key instruments for the development of KAZA was the KAZA Treaty developed over a period of three years following extensive consultations with the partner countries, internal and external stakeholders as well as communities living within and around the boundaries of the TFCA. In developing the KAZA Treaty Mr Modise indirectly detailed the long term agenda of action for the KAZA TFCA and also defined the structure and role of the KAZA Secretariat as we see it today.  Mr. Modise also played a big part in securing funding amounting to over €20 million sourced from the German Development Cooperation through KfW Phases I and II as well as other financial resources from other development partners. These meant he had to take the lead in putting across a strong case that KAZA is indeed a viable conservation and development programme worthy to be supported.

Mr. Mr Modise has lived and breathed TFCA’s for so long “I can’t think, talk or dream without TFCA at the end!” he exclaimed. Mr Modise shared intimate stories about his career in conservation spanning more than 40 years when in 1975 he was appointed Game Warden (Environmental Education) at the Department of Wildlife and National Parks in Gaborone where much of his work included promoting conservation awareness amongst the public and school going children, a job that he remembers as being second nature to him. He said those were the formative years of his career that caused him to cultivate within himself the two main objectives that he has upheld to this day; firstly to promote the conservation and sustainable management of wildlife resources, and secondly to foster public understanding, appreciation and respect for the natural environment. “I have worked tirelessly towards making people aware of the need to safeguard the welfare of the total environment. Most of the world’s natural resources are diminishing at a fast rate, not because people lack conservation awareness but because of the selfish choices they make caused by a false sense of entitlement. Sadly this attitude has led to the alienation of the general public towards conservation policies and the laws set out to protect the natural resources assets of our countries,” he said.

KAZA is one of Africa’s shining example of collaboration between states that have come together to make the TFCA vision come to fruition and hopefully last forever.  “Other nations can draw inspiration and learn from KAZA that through pooling conservation efforts between countries a lot can be achieved. I have to applaud the Governments of the Republics of Angola, Botswana, Namibia, Zambia and Zimbabwe for being able to join forces and make KAZA a reality regardless of how diverse their national policies, cultures and economies are”. Modise confirmed that being part of the determined working team from the initial stages of KAZA only made his love for conservation grow more. “Seeing communities gradually benefit substantially from conservation gives me a lot of hope because as custodians of the biological resources they are better positioned to conserve these resources for posterity. TFCA’s could not have come at a better time because the threats to the world’s ecosystems need to be dealt with desperately,” he advised. Through his current role at PPF Mr Modise’s wealth of experience is frequently called upon to help develop other TFCAs within SADC. PPF and KfW are one of the long-lasting donors of KAZA that have also provided much-needed technical support. “My wish for the future is for other TFCA’s to learn from the experiences and lessons learned in KAZA so that they too can continue to grow and flourish,” said an optimistic Modise.