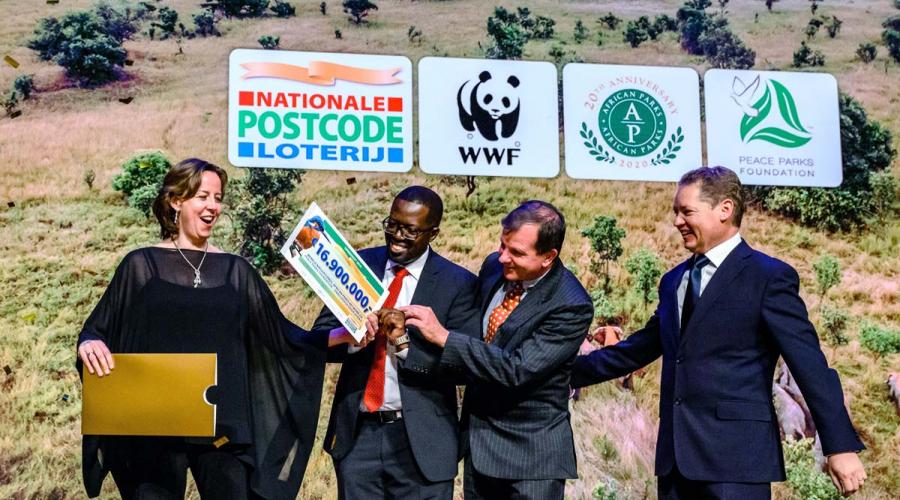 The world’s largest terrestrial transfrontier conservation area (TFCA), the Kavango Zambezi (KAZA), has received a major boost to its ecological and socio-economic development, in the shape of a 16.9 million Euro contribution from the Dutch Postcode Lottery.

At a prestigious Gala event on Wednesday 4 March in Amsterdam, the lottery’s Dream Fund grant was awarded to the World Wide Fund for Nature, Peace Parks Foundation and African Parks. These three leading not-for-profit conservation organisations have joined forces to assist the KAZA partner states to protect the region’s globally significant wildlife populations, counter the potential effects of climate change, safeguard and sustainably harness shared resources across borders, and greatly enhance the well-being of local communities.

Located in the heart of southern Africa, between the Okavango and Zambezi river basins, KAZA brings together areas with a mosaic of land uses, including protected areas, that straddle the boundaries of Angola, Botswana, Namibia, Zambia and Zimbabwe, into one cross-border ecosystem the size of France. KAZA is home to approximately half of Africa’s savannah elephants, 25% of Africa’s wild dogs, almost 20% of the continent’s lions, and 15% of the world’s wild cheetahs.

In order to match the strategic intent and scale of ambition to implement the various priorities in KAZA, there have been ongoing efforts to mobilise diversified donor and partner commitments. The five-year Dream Fund project augments support already provided to KAZA by the German Ministry for Economic Co-operation through KfW and other funders, and brings the KAZA partner states one step closer to successfully leveraging conservation as the main economic driver of the region, resulting in thriving landscapes for people and wildlife. This is also aligned with the KAZA TFCA vision to: “Establish a world-class transfrontier conservation area and tourism designation in the Okavango and Zambezi river basin regions within the context of sustainable development.”

Dr. Nyambe Nyambe, the Executive Director of the KAZA TFCA Secretariat stated: "We were very excited to receive this good news. KAZA is firmly anchored on the spirit of partnership. The collaboration between the three conservation NGOs and KAZA partner states in securing the Dream Fund support is a true testimony of this. On behalf of all the partners the KAZA Secretariat extends our sincerest gratitude to the players of the Dutch Postcode Lottery, who have provided the catalyst for partnerships that will generate real impacts for people and conservation within the KAZA landscape."

WWF, Peace Parks and African Parks, working closely with the KAZA Secretariat, will combine their unique strengths in an integrated approach focused on three core activities: developing safe havens, establishing connectivity through ecological corridors, and securing healthy rivers and catchment areas for the provision of fresh water. In addition, resources will be put towards improving the capacity of the Secretariat as long-term custodian of KAZA.

Three protected areas have been identified for development to ensure that elephants and other wildlife thrive while generating income from tourism for local communities. These are Luengue-Luiana National Park in Angola, and Sioma Ngwezi and Kafue National Parks in Zambia. Active protection of wildlife and biodiversity will encourage migratory animals to the safe havens, which in turn will open the door to increased tourism revenues. This will have a direct positive effect on communities living in these areas in terms of jobs and income.

For centuries, migratory animals such as elephants moved freely between the states, following ancient routes in search of water, food and safe breeding grounds. The longest large mammal migration in the world can be found in KAZA TFCA as thousands of zebras travel a 500 km round trip between Namibia and Botswana every year.

The increasing human footprint and unregulated land use has resulted in declining and fragmented space for the animals to move in. Herds of elephants become trapped in small islands of habitat, blocked from food and water by fences, settlements and farmland. This increasingly leads to conflict with humans, putting immense strain on both wildlife populations and community members.

A key pillar to success in KAZA is developing important habitat ranges for elephants and securing the safe passage of the free-roaming elephants, and other wildlife, between these safe havens, while providing for a viable livelihood for communities living along these corridors.

When facing climate change, healthy rivers that provide freshwater are one of the most important adaption strategies. The final focus of this project is on securing the flow of freshwater in the Kwando River that provides drinking water for people, wildlife and livestock; water for agriculture; and crucial habitat for fish - a primary source of protein for the local people.

A vision for the future

This project is not focussed on short-term gains or pursuing nature goals in isolation. Through inclusive collaboration, the shared vision is to transform KAZA into a climate resilient landscape that sustains harmonious living between humans and nature, leveraging a wildlife economy that is based on enhancing the value of natural resources and meeting the sustained growth needs of KAZA’s 2.5 million people.