Playing for Coexistence : Local Communities, Protected Areas Managers and Academics 'teaching each other ' 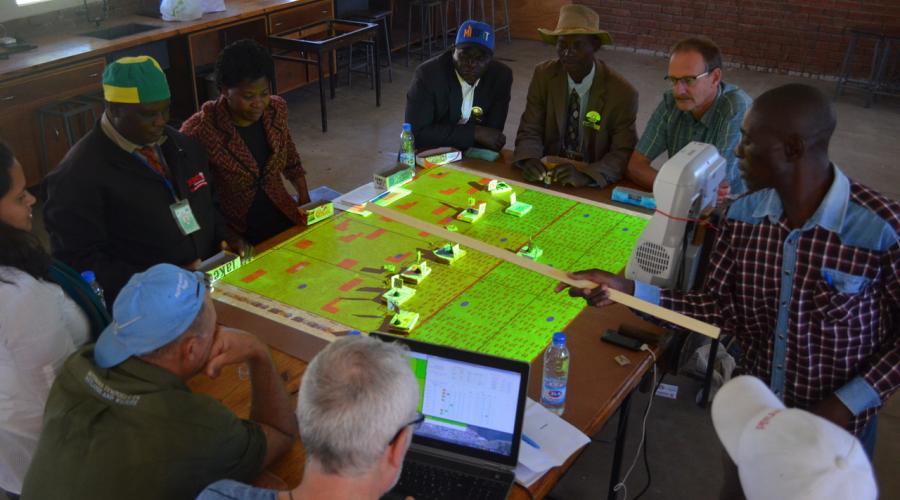 Over the 10 years, the Research Platform « Produce and Conserve in Partnership » (www.rp-pcp.org) has engaged local actors in research activities, not only as beneficiaries but also as partners within the research process. We believe that when it comes to understanding the socio-ecological dynamics at the edge of protected areas, the participation of rural communities and local protected areas managers is of paramount importance. By engaging a dialogue between researchers and local actors, we can facilitate the emergence of relevant research questions that need to be addressed.

Coexistence issues between protected areas and their peripheries is a central topic of the RP-PCP. One of the recent project led to the collective design of a computer-based role-playing game : «Kulayijana», which means «teaching each other» in chiNambya. Kulayijana was codesigned by researchers and members of the rural communities living at the interface between Hwange National Park, Sikumi Forest and the adjacent communal areas, within the KAZA TFCA (Perrotton et al. 2017, see link below). Originally designed to understand cattle herding strategies, the game recently evolved to become a multi-stakeholder arena. Kulayijana brings together participants to play the role of farmers or of protected area managers in a virtual environment similar to the one found in southern African TFCAs. While «farmers» have to manage livestock and fields, «protected area managers» have to conserve wildlife and control illegal hunting. The game reproduces the socioecological dynamics taking place at the edge of protected areas and, like in real life, these two types of actors are bound to interact amongst and between them, through conflicts (i.e. cattle impoundment, human/wildlife conflicts, competition for grazing), but also cooperation (i.e. negotiated rights of access, organized/collective grazing).

Prior to the RP-PCP Conference « Coexisting with(in) TFCAs : local perspectives » held in Chiredzi between the 22-27th of May 2017 , a two-days participatory workshop was organised in Malipati village (Chiredzi district, Ward 15, GL-TFCA). International researchers, protected area managers from two TFCAs (Gonarezhou National Park for the GL-TFCA and Sikumi Forest for the KAZA-TFCA) and members of rural communities living in Chiredzi district (GL-TFCA) and in Hwange district (KAZA-TFCA) were invited to play Kulayijana together. The first day was dedicated to playing sessions. The objectives were (i) showing the latest version of the game to local actors and test it, (ii) allow rural communities, protected area managers and researchers to discuss and share their views about coexistence issues in a neutral and balanced arena.

The second day was dedicated to discussions on the experience of the participants that had played Kulayijana. The discussions were focused on the interactions between protected areas and rural communities, particularly those addressing coexistence issues. Summaries of the playing sessions were presented, and several modifications of the game were suggested by participants. Most importantly, both rural communities and protected area managers emphasized the potential of such tool to promote coexistence between local actors by taking them out of their everyday institutional and social constraints.

Too often, scientific conferences bring together researchers...and researchers only. This workshop was the occasion for local actors and invited researchers to meet each other. Following the workshop game session, and a set of dances and plays given by pupils from the Malipati Secondary School, local communities were invited to appoint six local experts to co-chair the RP-PCP conference sessions, along with six researchers internationally recognised for their expertise in the themes of the sessions (see RP-PCP conference news).

Participatory initiatives such as Kulayijana game can play a key role in the promotion of coexistence within TFCAs. There is more to coexistence issues than human-wildlife conflicts. By taking conservation beyond the boundaries of protected areas, TFCAs have created heterogeneous mosaics of land uses including National parks, Protected Forests, private conservancies, CBNRM areas and farming communal areas. The stakes are high and tensions between actors rooted in the history of these places. If they are to achieve their objectives of meeting conservation and rural development goals, TFCAs need to develop practices and methods that bring these different land users to meet, share and negotiate at the local, national and regional scales.